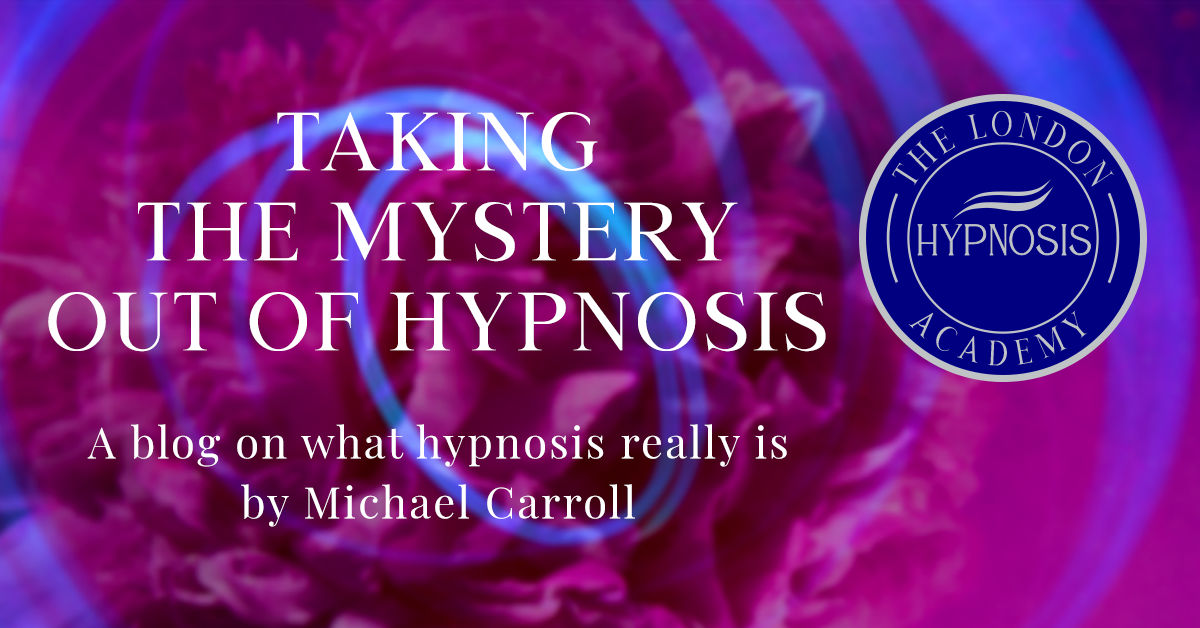 
There is often a state of mystery and mysticism associated with Hypnosis, partly due to its colourful history dating back to the rituals of Mesmer’s animal magnetism, and also its carnival image now present in theatres. So, let’s take the mystery out of Hypnosis, and take a look at what it really is, how we access hypnotic like states naturally and frequently in our daily life, and then compare these naturalistic Hypnosis with the hypnotic states induced by a professional in the field.


Hypnosis, for centuries, has been used for healing and well-being. The Ancient Egyptians built special ‘Sleep Temples’ where people who were unwell would go to rejuvenate and heal, assisted by a ‘health sage’ known as ‘swnw’. The practice of medicine goes back to 27 centuries BC in Egypt, and the ‘Sleep Temples’ were, where deep relaxation akin to Hypnosis was a key part of the healing process.


In relatively modern medical history, the late 1700s, Anton Mesmer, developed elaborate rituals to channel what he called animal magnetism, for people to heal from physiological and emotional health issues. Mesmerism, whilst showing prowess with positive outcome in healing, was eventually discredited. However, in the mid 1800s, a Scottish physician called James Braid, by focussing on certain processes within Mesmerism, such as fixation of attention (and disregarding the notion of animal magnetism) was able to get patients who were undergoing surgery, to access deep hypnotic states where they experienced natural anaesthesia. In 1843, Braid called his breakthrough ‘hypnotism’, which paved the way for the field of hypnosis to emerge.


Just like there are many different ways you can satisfy hunger and feel fulfilled from the food you have eaten, there are many different styles of Hypnosis, all which lead to the same outcome, the state of trance. In the trance state, new resources and behaviours which have been latent in what we call the unconscious mind, can be accessed to enable more choice in one’s life. The words and style of Hypnosis are the food of the mind, and when utilised effectively, they provide the mental nourishment for you to be healthy in attitude and corresponding behaviours.


Many Hypnosis professionals use the terms Hypnosis and Trance interchangeably. At the London Hypnosis Academy, we are a little more precise with our language, defining Hypnosis as the process (to hypnotise), and trance as the state someone enters as a result of the process of Hypnosis. Hypnotic trance is a more accurate definition of the trance state.


Hypnosis when conducted formally, usually includes a fixation of attention, for example an imaginary spot ahead on the wall or other flat surface, whilst the Hypnotist uses what is known as a ‘hypnotic induction’ to open the trance state. The induction includes the use of ‘hypnotic language’ spoken with a certain tonality. Soon into the induction, the subject’s eyes close and they become less aware of their surroundings and more aware of the Hypnotist’s words and their meaning.


Hypnotic trance is not sleep, although the deepest form of trance has a correlation to the brain processing, associated with somnambulism (sleep walking). A medium trance correlates with the hypnopompic state, which is the transitional state between sleeping and waking, or the half awake and half-asleep state, which we experience in deep relaxation.


The brain waves experienced in a light trance correlate with the day dreaming state.


In trance, the critical faculty (conscious mind) is offline, or absorbed with the Hypnosis process. With the absence of the critical faculty, a person becomes more ‘suggestible’. Hypnotic suggestion is the basis of change work in trance, where the Hypnotist provides suggestions, which when accepted by the unconscious mind, produce the change in behaviour or mindset that the client is seeking in their everyday life.


To summarise, we all experience forms of hypnotic trance, every day in breakaway states, such as day dreaming. Some break away states can be negative where attention is consumed with our fears and doubts. Hypnosis also correlates with the natural rhythms of the body, for example, sleeping to waking, or waking to sleeping, as well as unique states such as somnambulism. In hypnotic trance, a subject’s attention narrows and becomes more aware within a smaller band of sensory data. In the hypnotic state of trance, the critical faculty is minimised so the subject becomes more suggestible, and the hypnotist delivers hypnotic suggestions to promote behavioural change and overall well-being.